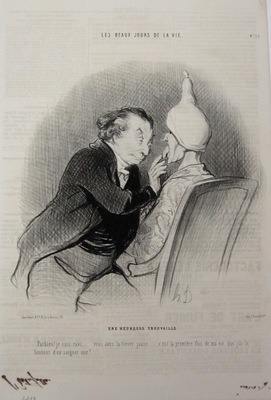 Displayed: Fourth floor, hallway next to Office of the Dean at the end of Administration & Finance hallway

Daumier expresses a negative view of the medical profession by showing an insensitive doctor who is cheery over his first diagnosis of yellow fever—which was considered among the world’s most serious infectious diseases. Most often occurring in tropical climates (with occasional outbreaks in French seaports), cases of the disease would be rare among Parisians.

How the virus was spread (by mosquito bites) was unknown at the time, and it was incorrectly assumed to be contagious through direct human contact. If it really was spread this way, the doctor’s “happy find” might have meant that the disease posed a serious threat to public health in Paris.