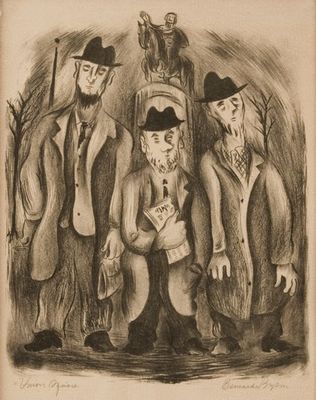 Displayed: Fourth floor, Conference room E493, next to Office of the Dean

Bernarda Bryson Shahn began her career as a writer, printmaker, and illustrator; but in her later years was better known for her paintings. Born in Athens, Ohio, she studied at Ohio University, The Ohio State, and the Cleveland School of Art. After meeting artist Ben Shahn in 1933, they became companions and eventually married (shortly before her husband’s death in 1969).

The subject of her print involves intellectuals at Union Square in New York City (with the equestrian statue of George Washington behind them).

The rare print was previously used to decorate a basement office in UND’s Montgomery Hall, where it was framed without archival materials. During a rainy spring, the artwork became endangered when the basement flooded and the humidity sharply escalated. After the severely dampened print dried, it was re-matted with archival materials and reframed. It was also reassigned an educational purpose, in recognition of its historical significance.