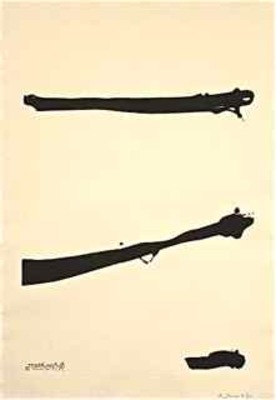 Robert Motherwell studied art history, philosophy, and literature at Stanford, Harvard, and Columbia. Recognized as a spokesperson and theorist for modern art, as well as a very prominent Abstract Expressionist painter, he had little formal training in studio art.

The artwork on display by Motherwell is from the For Meyer Schapiro print portfolio. The thick painterly black lines in Motherwell’s print reveal a preoccupation with automatist methods, which involved the artist’s reliance on instinct or intuition as he worked. While the resulting image is seemingly nonrepresentational, the print’s title refers to a tangible object—a prayer shawl worn over the head or shoulders by Jewish worshippers, which is often adorned with black stripes.