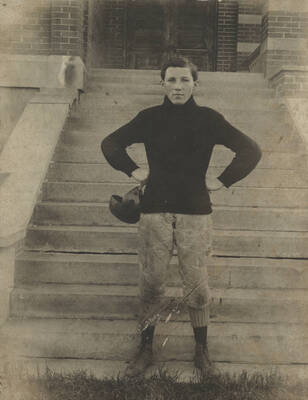 A photograph of UND football player, John (Chick) Conmy, in his football uniform. Conmy played on the 1902 Football Team as a freshman. According to the 1906 annual, John P. Conmy "spent his Freshman and Sophomore years at UND, but left us last fall to enter St. Thomas College, St. Paul. He, however, decided that no class could compare with the class of '06, and returned at the beginning of the winter term. He is an all-round athlete, conspicuous on the football and baseball fields, and in track work" (62). For more information on the UND Football Team see UNDs Football Media Guide, 1904 Annual pg 169-170, and A Century of UND Sports, pg 47.