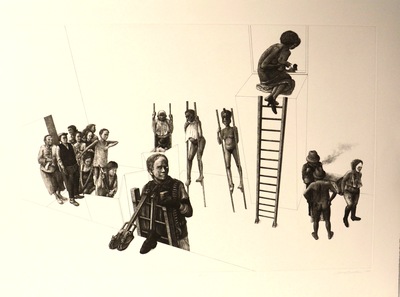 David Becker is a painter, printmaker, and educator who was born on August 16th, 1937. He was raised in Milwaukee, WI and attended a handful of different colleges, but received his BFA in 1961 from the University of Wisconsin-Madison and later his MFA in 1965 from the University of Illinois. Becker joined the faculty at Wayne State University in Detroit, MI where he taught life drawing till 1985 when he joined the University of Wisconsin-Madison and taught till retirement in 2006. In the 1970’s, Becker switched from painting to printmaking, and in 1975 his etchings were included in the Twenty-fourth National Exhibition of Prints at the Library of Congress. His work can be found within the collections of the Brooklyn Museum, the Art Institute of Chicago, the Detroit Institute of Arts Museum, and the Smithsonian Museum of American Art.

Depiction of people on stilts and ladders as well as a group of people huddled by the doorway.