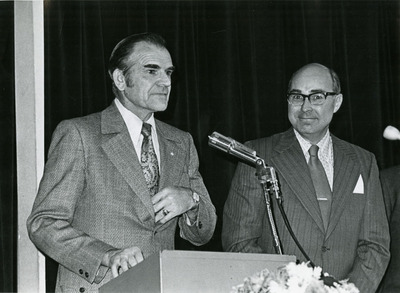 North Dakota Governor Art Link and Alan Fletcher, Dean of the UND School of Engineering and Mines, appear beside one another alongside a podium at an unknown event in November 1973. Link served North Dakota in the U.S. House of Representatives from 1971 to 1973 and as Governor from 1973 until 1981. Fletcher acted as Dean from 1969 until his retirement in 1989.