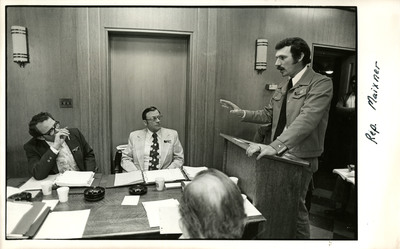 From back of photograph: "Representative Rick Maixner testifies before Senate Committee. Others - Howard Freed, Adam Krauter"

Rick Maixner represented New England in both the North Dakota House and Senate during the 1970s and 1980s. He was also the Executive Director of the United Plainsmen Association, a lobbying group concerned with the development of Fort Union coal deposits in North Dakota.

Howard Freed (left) served Dickinson in the North Dakota Senate from 1967 to 1978. He was the President Pro Tempore of the Senate during the 1977 legislative session, when this photograph was taken.