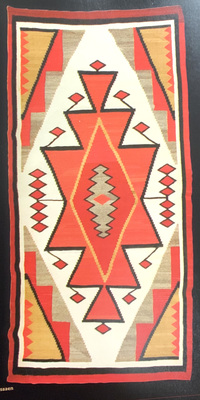 Donated by Karleen Home Rosaaen in 1988

This piece is part of a collection of four large Navajo rugs donated to the UND Foundation by Karleen Home Rosaaen, a UND graduate of the class of 1927. Each contains bold geometric patterns and vivid colors. Swastikas appear on the largest of the rugs, predating by decades the appropriation of the same motif by Adolf Hitler for use as a symbol of National Socialism in Germany. Prior to the Second World War, the swastika was used as a spiritual symbol of the Navajo. Although this ancient symbol remains acceptable within some Asian religious traditions, the Navajo gave up its use due to the stained political connotations it had acquired in the Western World. According to information provided by the donor, all four rugs in this collection date from about the turn of the 20th century.

From the Karleen Home Rosaaen plaque:

"The four Navajo rugs hanging in the area were a gift to the University of North Dakota Foundation in 1988 by alumna Karleen Home Rosaaen, '27. Raised in Bowman, N.D., Rosaaen had a distinguished career as a teacher and a Girl Scout professional. Her work with the Girl Scouts took her to summer camps throughout the country. Rosaaen's fascination with Navajo rugs as a child led to her collecting them as an adult. The four rugs donated to UND were woven at the turn of the century. Rosaaen received the Sioux Award, the UND Alumni Association's highest honor, in 1981. She now lives in Tucson, Arizona."