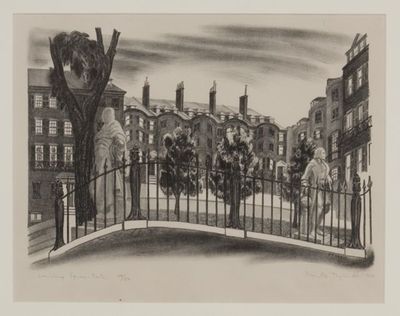 Funded by the Federal Government’s Public Works of Art Project

Prentiss Taylor was an illustrator, lithographer, and painter. He was born in Washington, DC, and studied at the Art Students League in New York. Although white, his artistic interests drew him toward African-American culture and the Harlem Renaissance. In the early 1930s, he became closely associated with African-American poet, novelist and playwright Langston Hughes (1902-1967), several of whose publications were illustrated by Taylor. In the mid-1930s, Taylor resettled in the city of his birth, where he became president of the Society of Washington Printmakers in 1942. Later he also worked as an art therapist and a university teacher.