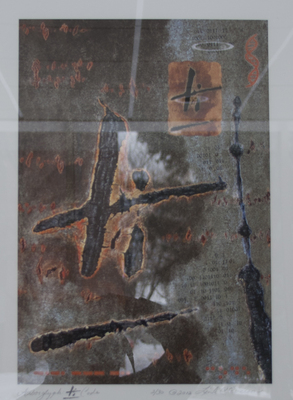 Seemingly disconnected backgrounds formed Linda C. Everson’s art career. Linda was raised in ND in a woodworking family, instinctively doing artwork as a child. She first experienced art classes at UND where she graduated with a major in Fine Arts. Subsequently, Linda was a graphic designer in the fashion industry in New York, where she gained additional exposure by exploring the contemporary art scene in Soho and the uptown museums. Post-graduate studies were completed at multiple venues. Printmaking (with photographic components) is her primary medium. However, Linda also does some shaped paintings, mixed media work, bookmaking, and paper arts. Linda currently lives in Colorado and does fine arts in her home studio.

The confluence of her ND roots, NY experiences, and the Colorado landscape has impacted Linda’s aesthetics. Traveling the US and the world extensively has given her insight into various sights, cultures, artifacts, and architecture which have influenced the textural imagery, symbolism, and jewel-like palette in her artwork.

Linda was involved in several art memberships, including an art co-op. For several years, she was the Co-President and Co-Chair for Exhibitions of the Women’s Caucus for Art/ Colorado Chapter. In these capacities, she curated several of the WCA-CO art shows. It was in these venues she explored other art mediums, concepts, and themes. Her artwork has been shown locally, nationally, and internationally. She has won several art awards, been published, and has done several public art commissions.