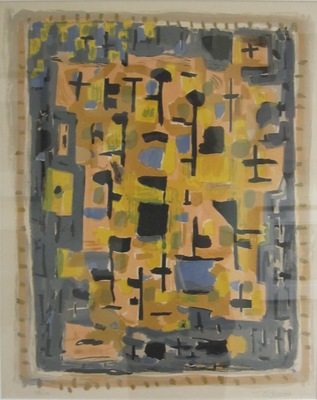 Roger Bissiére began studying at the école des Beaux-Arts de Bordeaux in 1905 under Paul Francois Quinsac. Bissiére studied there until 1909, then in 1910 he went to study under Gabriel Ferrier at the École des Beaux-Arts in Paris. Bissiére mostly painted, starting with a cubist style influenced by Jean-Baptiste-Camille Corot and Pablo Picasso, and later finding his own personal style that leaned into the abstract and using stains of rich color, but he also designed several stained-glass windows for some churches.

After the Second World War, Bissiére’s painting evolved into an abstract style in the orbit of Art Informel and Tachisme that fused expressive fauve-like color with a loosened cubist structure, as can be seen in his color lithograph, October.