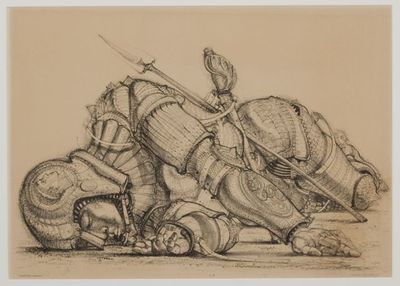 Nationally recognized as a painter, sculptor, and printmaker, Robert A. Nelson received his BFA and MFA at the Chicago Art Institute and his EdD from New York University. Teaching at UND from 1960 to 1972, he also served as Art Department Chair. Nelson later taught at Cleveland State University, the University of North Carolina at Chapel Hill, and Millersville University. His works are found in numerous museums, including the Museum of Modern Art in New York, the Seattle Art Museum, the Walker Art Center, and the Smithsonian Institution.

Unrelated to regional themes, Nelson's Sleeping Soldier is a romantic subject that escapes concerns of the here and now.