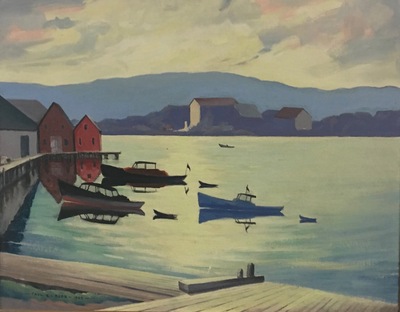 Paul E. Barr, an accomplished painter, was the first Chair of UND’s Art Department—a position he held for over a quarter century. Born in Tipton County, Indiana, Barr studied art in the United States and France. During his career in art, he painted scenes in over ten countries and wrote about art. He co-authored a textbook with Eugene E. Myers, Creative Lettering, and independently wrote an early study on regional art history, North Dakota Artists, published posthumously in 1954.

Harley E. French, who was Dean of UND’s Medical School from 1911-1947, was the painting’s original owner and it was later in the possession of his daughter, Mary Margaret French Frank and her husband Richard Frank—a Jewish refugee from Nazi Germany who taught in the Chemistry Department for 20 years.

A special request was made by the donor that the painting be hung in a location within the School of Medicine and Health Sciences.