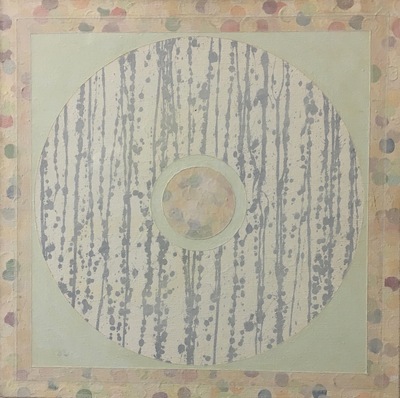 James Hendricks (1938-2017) born in Little Rock, Arkansas. He received his MFA from the University of Iowa in 1964. His artwork is included in Smithsonian Institution National Air & Space Museum, Museum of Fine Arts in Boston, and in numerous other collections

In 1968, Hendricks created a series of photo-realist “Moon Paintings” that were based on photographs provided by NASA. These paintings were exhibited in 1969 at the Smithsonian Institution’s National Air and Space Museum, adjacent to the first moon rock on display. The work on display, executed at few years later, continues the lunar theme as seen in the circular forms in the center. The artwork also reveals how the artist’s “Moon Paintings” had transitioned from realism into abstraction.