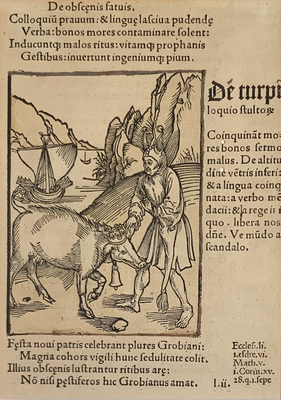 Purchased with funds by the Myers Foundations.

Albrecht Dürer was a German painter and printmaker born in Nuremberg in 1471. Dürer studied as an apprentice under Michael Wolgemut, and learned the trade of painting, wood carving and copper engraving. He is best known for his reputation as a Northern Renaissance artist, specializing in high-quality woodcuts, paintings and prints which centered around the subject of religion. Dürer also played an important role in the history of printmaking and his prints were distributed throughout Europe. Additionally, he also cultivated the attitude of a humanistic scholar and wrote a treatise on geometry. Works by Albrecht Dürer can be found in the permanent collections of the Metropolitan Museum of Art, the National Gallery of Art, and several other collections internationally.

Depiction of a fool or jester standing next to a boar wearing a crown on its head and a bell around its neck. In the background there is a ship.