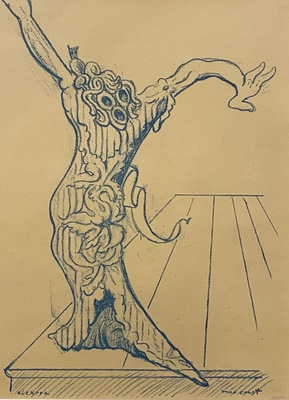 Max Ernst was a German sculptor, graphic artist, painter, and poet primarily involved in the Dada movement and Surrealism. Ernst had no formal artistic training but has gone on to invent the artistic techniques of ‘frottage’ and ‘grattage’.

In 1939, at the outbreak of the war, Ernst was interred in Camp des Milles as an ‘undesirable foreigner’ for several weeks before being released. Ernst then fled to the United States for the remainder of the war and later returned to France.

Max Ernst was so fascinated with the new rise in psychology and psychoanalysis procedures created by Sigmund Freud at the time, that he decided to use Freudian dream theories on himself to discover the root of his own creativity. By tapping into his unconscious he was able to delve even further into the Surrealism movement. The title "Elektra" is Ernst's personal depiction from Freud's Electra Complex, or a facet of a psychosexual relational competition between a young girl and her mother for the love of her father.