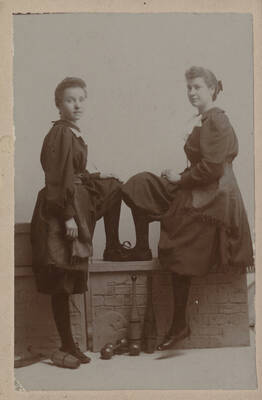 Two members of Cora Smith's calisthenics class in gym clothes with some of the equipment used. In 1898 the class became a requirement. Cora Smith (1867-1939) was a member of the first graduating class of UND in 1889 with a BS. She was also an instructor in arithmetic, geography, spelling and handwriting (1884-1889). She then attended Boston University graduating in 1892 with a degree in medicine. She was the first woman to take and pass the North Dakota medical board examination. She practiced in Grand Forks from 1892 to 1896 while also teaching calisthenics (1892-1895). She also was active in the women's suffrage movement. On May 30, 1964, Cora Smith Hall, a woman's dormitory on the UND campus, was dedicated in her name.