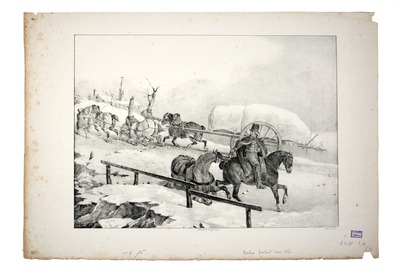 Best known for his large-scale canvas, The Raft of the Medusa, Theodore Gericault was a painter and early practitioner of lithography during the Romantic era. Gericault's art often revealed an understanding of equine anatomy and interest in representing horses in action-as in The Charging Chasseur of 1812, which was followed by a series of studies of horses and cavalrymen over the next several years, as well as lithographs depicting draught horses and thoroughbreds.