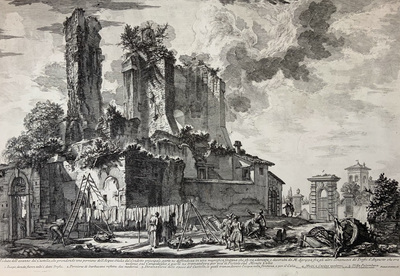 Giovanni Battista Piranesi was an Italian architect and artist born in born Venice in 1720. The son of a stone master, Piranesi apprenticed under his uncle Matteo Lucchesi where he worked on restoring historical buildings throughout Rome. He was later introduced to the intaglio practices of etching and engraving by Giuseppe Vasi. Piranesi is best known for his etchings of the city of Rome as well as his series of works depicting elaborate, fictitious prisons known as Le Carceri d’Invenzione. Works by Piranesi can be found in the permanent collections of the Metropolitan Museum of Art, the National Gallery of Art, and several other collections internationally.

Piranesi was fascinated by the remnants of antiquity still visible in his native Italy. His detailed views of ancient Roman ruins were especially popular among Northern European visitors, who included Rome as a stop on the “Grand Tour.” As his prints circulated throughout Europe, they helped promote the neoclassical style, influencing artists like the English painter Joseph Francis Nollekens.