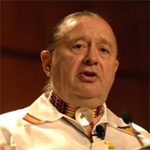 It is no secret that there are strained relations between Native American tribes and the U.S. Government. In fact, many tribes want to be considered sovereign nations, free from US law and expectations. Even more so, most Americans understand little about American Indian life, traditions, and history. How are we to have a serious conversation about Indian liberation if we don’t know the basic facts? On this episode, we look not only at political question of tribal sovereignty, but delve deeply into its relationship to Native American culture, theology and history.

Tink has volunteered in the Indian community as (non–stipendiary) director of Four Winds American Indian Survival Project in Denver for two decades. In that capacity he functions in the urban Indian community as a traditional American Indian spiritual leader. He is past president of the Native American Theological Association and a member of the Ecumenical Association of Third World Theologians.