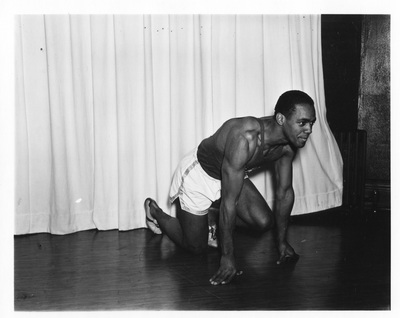 Posed photograph of Frederick Douglass "Fritz" Pollard, Jr. from 1939. Fritz Pollard Jr. was the first African American athlete at UND. Pollard won a bronze medal at the 1936 Olympics for high hurdles. On February 6, 1937, Pollard placed fifth at the prestigious Milrose Games in New York City. He played on the UND Football Team from 1935-1937 and lettered all three years. While playing football for UND, he helped the 1936 Football Team win the NCC Championship. Pollard also ran for the track team, where he helped the track team win the NCC Championship in 1937. Fritz is the son of Frederick Douglass Pollard, Sr. who was one of the first African Americans to play in the NFL in 1920 and the first African American NFL coach. (Information from A Century of UND Sports pg 84, University of Northern Plains pg 390, 1937 Dacotah pg 120, 122-124, NFL Hall of Fame website).