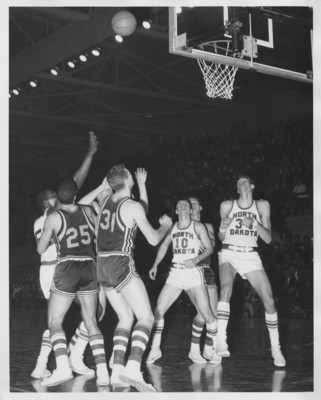 Guard Jerry Schultz (10) and Forward Phil Jackson (34) position themselves underneath the backboard for a rebound versus an unidentified opponent. Both Schultz and Jackson graduated from UND in 1967.

A native of Wheaton, Minnesota, Jerry Schultz played three seasons at UND: 1964-65, 1965-66 and 1966-67. In both his junior and senior years, he averaged double figures in points. He was also a co-captain (with Phil Jackson) during his senior year.