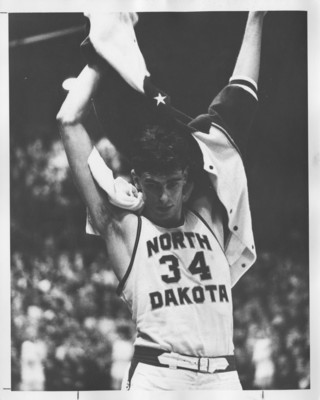 UND Basketball player Phil Jackson puts on his jacket upon leaving a game. Phil Jackson graduated from UND in 1967, received an honorary doctorate in 2008, and was presented the Sioux Award in 2018. He won two National Basketball Association titles as a player for the New York Knicks in 1970 and 1973, in addition to eleven as a coach for the Chicago Bulls and Los Angeles Lakers in the 1990s and 2000s.