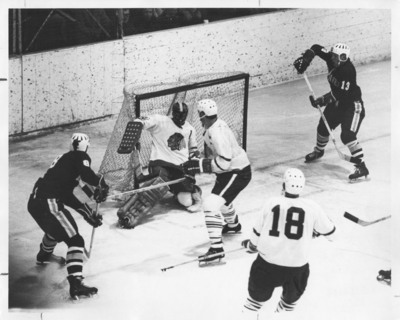 UND Hockey players Timothy O'Keefe (18), goalie Gary Severson (1), and an unidentified player battle the Denver Pioneers. O'Keefe played for UND from 1968 until 1971 as both a center and defenseman. He scored four goals, in addition to twelve assists. Severson, a goalie, played for UND from 1967 until 1969. Both O'Keefe and Severson were Grand Forks natives. This photograph can be found in the 1969 Dacotah Annual, page 81.