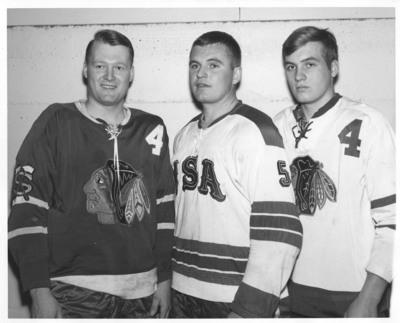 Photograph of UND Hockey players Gary Brandt, Don Ross, and Mike Baumgartner. Gary Brandt played defense from 1966 to 1968 and scored five goals. Don Ross played both center and defense from 1961 to 1964, scoring a total of 38 goals. He was a member of the 1963 NCAA Championship team. Mike Baumgartner was a defenseman from 1968 to 1971 and scored 17 goals during that time. All three players were natives of Northwestern Minnesota.