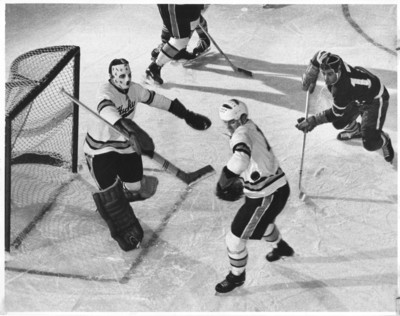 "In the WCHA playoffs the Sioux faced Michigan Tech, which had beaten the Sioux earlier in the season by substantial scores. In the first game of the playoffs, the Sioux scored early in the first period and went on to win 2-0. Wayne Gurba (17), a sophomore from Flin Flon, Man., tries a shot while the Sioux are penalized. Action in the playoffs contained clean skating." -From the 1963 Dacotah Annual, page 85.