Goalie Sprawled on the Ice 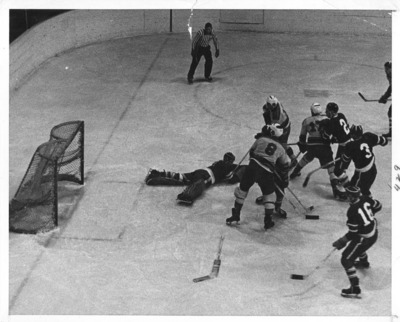 A native of Virginia, Minnesota, George Baland tended goal for UND from 1961-64 and registered a save percentage of .866. A defenseman from Red Deer, Alberta, Goodacre scored 7 goals and registered 36 assists during the 1960-63 seasons. Bob Bartlette was a winger from Edmonton who played at UND from 1961 until 1963. During that time he scored 24 goals and assisted on an additional 35. Bill Selman hailed from Fort Frances, Ontario, and played defense for the UND Hockey team from 1960 to 1963. He scored one goal during that time and recorded 19 assists. All four individuals were part of the 1963 National Championship team.