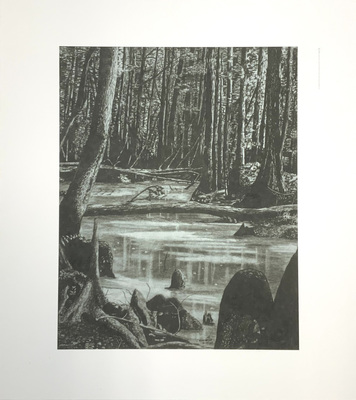 Inkjet print (original drawing is pen and ink on paper)

Charles Kupchella was President of the University of North Dakota from 1999-2008. The landscape drawing, which was executed a year after Kupchella completed his PhD in physiology, reveals the youthful artistic talent of UND’s future President.

Interestingly, Kupchella’s interest in art making is not unique among UND Presidents. Robert O. Kelley was known to enjoy sketching and also made stained glass pieces. Going further back in time, Frank McVey (President from 1909-17) was known to be active as a painter—especially after leaving UND to become President at The University of Kentucky. George A. Starcher (UND President from 1954-71) also liked to make art and became a prolific artist. UND's current President, Mark Kennedy, also produced a few paintings earlier in his life.