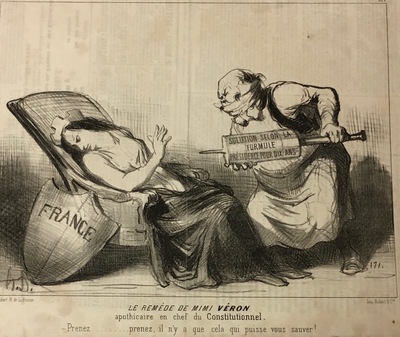 Translation: THE REMEDY OF MIMI VÉRON Chief Apothecary of the Constitutional. - Take ....... take, only that can save you!

In this lithograph, which references the pharmaceutical world, an apothecary attempts to inject an enema syringe into France (personified by a female figure). The enema would allow President Louis Napoleon to stay in office for ten years, instead of four—which was then the limit set by the Second Republic Constitution.