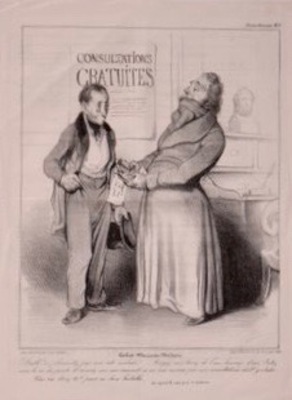 Devil ! do not joke with this disease!…. Trust me, drink water, lots of water. Rub your leg bones and come back to see me often, it won't ruin you my consultations are free ……… You owe me 20 f for these two bottles. We take the glass for 10 cents.

Robert Macaire is a villainous character adopted by Daumier from a melodrama that was popular at the time. Daumier recreates him as a charlatan involved in numerous professions, among them the doctor and pharmacist. Here Macaire swindles a patient while offering supposedly “free” consultations.