Dinner and a Movie (diptych) 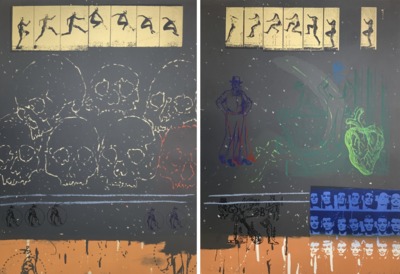 bottom right of both pieces

Kim William Fink is a Professor in the Department of Art & Design at the University of North Dakota, where he teaches printmaking.

Fink's art often explores the ways in which cultural memory is produced. His work calls attention to the images and meanings that create individual and collective identities. Fink also explores the influence of popular culture and postmodern perspectives on identity.

Note from the artist:

"'Dinner and a Dance', A graphic version of a 3-D installation piece I did as a result of visiting the Art Academy of Oradea, Romania (with UND students) about 2009. The school was a 13th century citadel located in a city that was originally a jewish settlement. Romanesque in architecture, the building was partially destroyed due to neglect and time. During a tour of the building, I was told that shortly after we were scheduled to leave, there was planned an annual art festival in the building, held primarily in the basement. The previous year was the first year of the festival and the basement was full of decades of junk hip-high. Cleaning out the basement, they found the dirt floors to be uneven, so they proceeded to level the floor. They began to find human remains - with bullet holes in the skull. Turned out that the citadel was headquarters of the Nazi and later the Communist party's military. The remains were local jews executed and buried on the spot. Up to that point, they found about 100 bodies. The imagery I came up with was immediate when informed this, like a visit from ghosts."