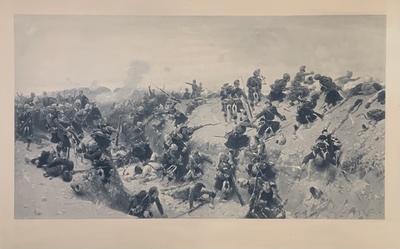 Alphonse de Neuville (May 31, 1835 - May 18, 1885) was a French painter who studied under Eugène Delacroix. Neuville is known for portraits of soldiers and patriotic depictions of the Crimean War, the Zulu War, & the Franco-Prussian War. Some of his works are in collections such as the Met and the Hermitage Museum.

Léopold Flameng (November 22, 1831 - September 5, 1911) was an engraver, illustrator, and painter. Flameng is known for his etchings of works by Leonardo da Vinci, Rembrandt, and Delacroix. He created this work under the employment of Goupil & Cie.

Text outlined on back of the frame:

Sir Garnet Wolseley, by a victory based on a long and successful night march, destroyed the power of Colonel Arabi Pasha on 13 September 1882. A remarkably tidy operation. British casualties were under 450. A cavalry death on Cairo succeeded the rout and obtained the surrender of the remaining enemy forces.

Painting is The Storm of Tel-El-Kebir by the 1st Battalion (The Black Watch) of the Highland Brigade (The old 42nd). The battalion charged the Egyptian position with bayonets and, showing great courage and determination, captured a deep ditch and entrenchments of the enemy. In 1881 the battalion had received the name "The Black Watch" (Royal Highlanders).