The Battle of Rorke's Drift 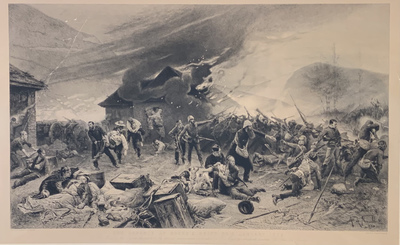 Alphonse de Neuville (May 31, 1835 - May 18, 1885) was a French painter who studied under Eugène Delacroix. Neuville is known for portraits of soldiers and patriotic depictions of the Crimean War, the Zulu War, & the Franco-Prussian War. Some of his works are in collections such as the Met and the Hermitage Museum.

Léopold Flameng (November 22, 1831 - September 5, 1911) was an engraver, illustrator, and painter. Flameng is known for his etchings of works by Leonardo da Vinci, Rembrandt, and Delacroix. He created this work under the employment of Goupil & Cie.

This etching depicts the defense of Rorke’s Drift, a confrontation that occurred during the Anglo-Zulu War within 1879. During the Battle of Isandlwana, a group of 3,000 to 4,000 Zulu warriors diverted from their main force to attack Rorke’s Drift, a small 150 manned British depot and hospital. The engagement lasted 12 hours from January 22nd to January 23rd with the members of the 24th regiment holding the line against the storming Zulu infantry. The final hour resulted in a successful British defense with 17 British and 400 Zulu casualties.

The successful defense of Rorke’s drift saw a boost in British morale after the defeat at Isandlwana, but ultimately saw little strategic influence in the greater campaign. The Zulu War would draw to a close in July 1879 with a British victory at the Battle of Ulundi.

Text on front of Print: To Her Majesty the Queen, this plate is by special permission dedicated by Her Majesty's obedient servants The Fine Art Society.