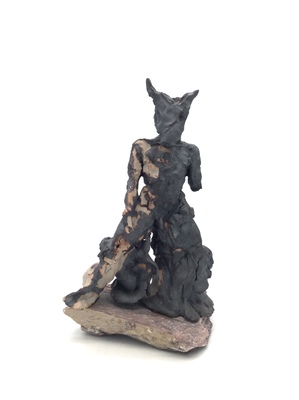 Bederman was born and raised in Houston, Texas, but moved around growing up, frequently spending time in Austin, Santa Fe, Chicago, and San Francisco. She received her BFA in painting at Minnesota State University Moorhead in 1993, as well as her MFA in painting at the University of North Dakota in 1997. Bederman works in multiple medias, but she is best known for her focuses in painting, sculpting, printmaking, and drawing. According to her, “"My images are metaphors for everyday life experiences...I combine memories of actual places with a mixture of reality, myth and dream” (Bederman). Bederman spent over 10 years as an art instructor for a handful of colleges in North Dakota, mainly Bismarck State College, and spent 5 years as an Artist in Residence. In 2006, she moved to Montana and taught art at Dawson Community College in Glendive till 2016. Baderman now focuses her time on group and solo exhibitions.

An abstract figure of a horned man.