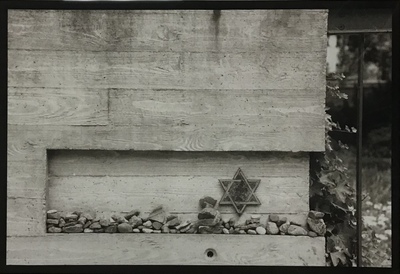 Purchased with the funds from the Myers Foundations.

A black and white photo of a memorial with the Star of David.

Conversations with the Ancestors

A cemetery is thought of a place for memorializing a loved one, a place to say goodbye, a place for reflection on one’s own mortality. More interestingly, cemeteries are a place to have a conversation with an ancestor, a place to ask for advice or work out a problem. These images invite communication, intervention, questions and connection. They remind us to take guidance from the wisdom and the energy of the ages.

During my time in Italy and Germany I became ever increasingly aware of the importance these countries place on the wisdom of those that came before. In Berlin, for example, the acknowledgement of the realities of WWII is genuine, raw and ever present. For me, someone of Jewish heritage, the visit to Berlin was intense and life changing. All over Berlin the phrase used isn’t what I grew up with in America:

The experience I had in Italy was different but also powerful. While visiting cemeteries in Tuscany I began to notice that in the crypts there were often chairs set up in pairs, symbolizing, or maybe actually allowing for, conversation. The implication seemed to be, come in, sit down, and let us share with you our wisdom. In times of such upheaval in the US, the profound connection that these two countries have their history, and the invitation to learn from it gives me hope that we too can learn from our past mistakes. For as we know “Those who cannot remember the past are condemned to repeat it.” (George Santayana).

Conversations with the Ancestors was inspired by these two experiences and the imagery suggests connections to the past.