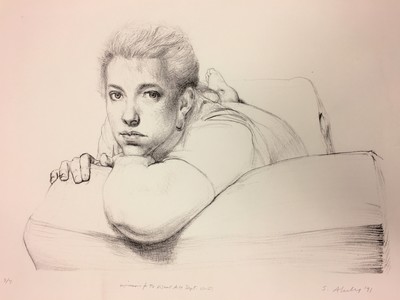 Sigmund Abeles was born in 1934 in New York and raised in South Carolina. His formal art education began in high school when he mentored under Truman Moore Sr., a wood sculptor. Abeles later received his BA in Fine Arts from the University of South Carolina and his MFA from Columbia University. He also studied at the Pratt Institute in New York and the Skowhegan School of Painting and Sculpture in Maine. Shortly after graduating, Abeles was drafted into the army and posted to Heidelberg, Germany where he worked on illustrating maps and charts for the US Army for two years until his discharge. Upon his return to the US, Abeles briefly instructed adult art classes before securing a position at the Swain School of Art Design where he taught for three years. He later became a resident artist at Wellesley College for several years before being awarded a sabbatical grant by the National Endowment for Arts, then the National Council of Arts and Humanities.

Abeles is currently Professor Emeritus for the University of New Hampshire after 27 years of teaching and he works full-time in his New York studio.

Sketch of a woman leaning over the top of a chair.

Featured in the student-curated exhibition, #InYourFace: Reflections on Contemporary Portraiture, 2019