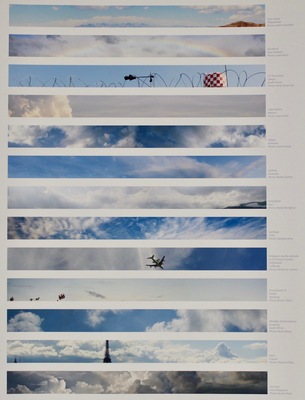 Kim Abeles is a photographer and artist. Many of her works are related to social issues that explore geography, feminism, and environmentalism. She mixes different media to explore the relationship between urbanism and social issues. The Shared Skies prints were created as part of the Binary Inventions portfolio, which was produced for and exhibited during the 2012 University of North Dakota Arts & Culture Conference.

Shared Skies reminds us that we all live under the same sky. Even if the photos were taken thousands of miles apart, it is the same sky that connects us as all as humans to each other.