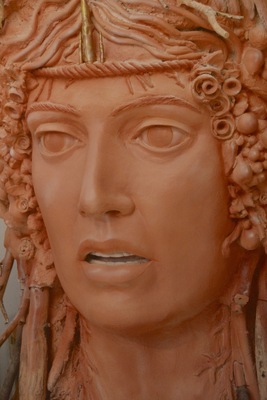 Audrey Flack is an internationally renowned New York artist, who emerged as a major painter in both the photo realist and feminist movements of the 1960s and 1970s. At the height of her acclaim as a painter she abandoned that medium to become a sculptor.

New York artist Audrey Flack attained art-world fame for her Photorealist painting before turning to sculpture in the 1980s. This print is based on her large-scale 1996 cast sculpture, Daphne (a version of which is now sited in the lobby of UND’s Education building). Though inspired by Greek and Roman art in both its subject and style, Flack’s Daphne was conceived as a contemporary feminist icon. The bullets on Daphne’s head make reference to the issue of violence against women in today’s world.

Known to be a strong advocate for teachers, Flack was the keynote speaker at the National Art Education Association Convention in 2007. During the same year, she came to UND as a Visiting Artist and worked closely with student assistants on multiple editions of prints. By working alongside Flack, the students gained a valuable learning experience.