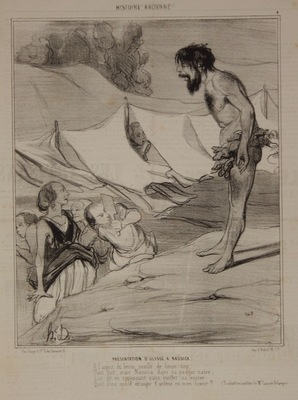 Translation: PRESENTATION OF ULYSSE AT NAUSICA. Like the hero soiled with black silt, Everything flees, but Nausica in her naive modesty; Said him blushing without leaving his laundry: What noble foreign God brings you to my washhouse? (Unpublished translation by Mr. Casimir Delavigne).

Tear in the middle of the page. Some foxing.