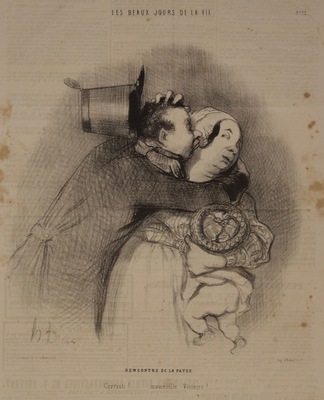 Honoré Daumier was a prolific painter, printmaker and caricaturist born in 1808 in Marseille, France. In 1822 Daumier studied under Alexandre Lenoir, an artist and archaeologist that was dedicated to saving French monuments during the French Revolution. One year later he went on to attend the Académie Suisse. His works are best known for commenting and critiquing on the 19th century social and political life in France. Honoré Daumier's works can be found at the Louvre, the Metropolitan Museum of Art, the Rijksmuseum, and several other prominent collections internationally. The University of North Dakota holds more than 1600 works by Daumier, the vast majority of which are part of the Lilly Jacobson Collection, which can be accessed here: https://commons.und.edu/daumier-prints/. Aside from making powerful politically-charged images that reflected his pro-republican views, Daumier satirized lawyers, doctors, businessmen, professors, and lifestyles of the bourgeoisie. Although the inscriptions that accompany Daumier’s lithographs were not written by him, one might assume they mostly conveyed the spiriit of the artist’s intent behind his images.