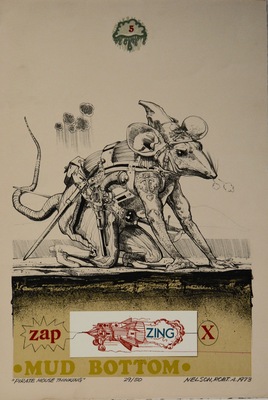 Mice are frequent characters in fables and folklore. Like the pirate, they are known for their stealth ability pilfer. Robert Nelson has combined the two thieves in to one creature, which seems to be contemplating its strategy prior to racing off to the next raid. Nelson often used animals to address issues of politics and war in his works.

Nationally recognized as a painter, sculptor, and printmaker, Robert A. Nelson received his BFA and MFA at the Chicago Art Institute and his EdD from New York University. Teaching at UND from 1960 to 1972, he also served as Art Department Chair. Nelson later taught at Cleveland State University, the University of North Carolina at Chapel Hill, and Millersville University. His works are found in numerous museums, including the Museum of Modern Art in New York, the Seattle Art Museum, the Walker Art Center, and the Smithsonian Institution.