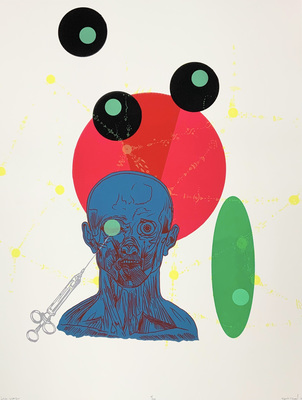 Patrick J. Reed is an artist and writer originally from Iowa City, Iowa. He received his MFA in printmaking from the University of Alberta Department of Art and Design in 2010. He then studied at University of Iowa Center for the Book where he reviewed a MFA in Paper-making and bookbinding in 2013. He received a Fullbright Award in 2014 to conduct research in Munich, Germany where he relocated to. Reed incorporates themes from 16th century German woodcuts in his current work making parallels between the post apocalyptic imagery of that time and present day.

The juror in 2008, Anthony Kirk, Artistic Director and Master Printer at the Center for Contemporary Printmaking in Norwalk, Connecticut, said the following in relation to the portfolio’s nocturnal theme:

Not surprisingly, the intaglio techniques of aquatint, drypoint and etching dominate, as they have from the age of Rembrandt and Goya, when artists needed to portray darkness in print. The velvety rich blacks and atmospheric plate tone of an etched plate have produced prints in this portfolio, which depict surreal space and the fears and anxieties of night.

Reed studied at the University of Iowa