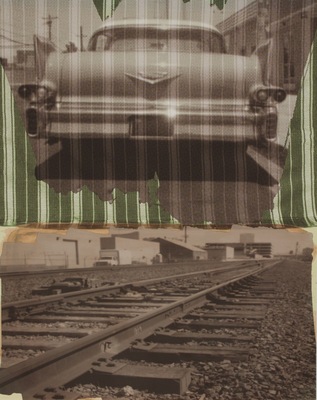 Erik S. Beehn received his Bachelor of Fine Arts degree from The School of the Art Institute of Chicago in 2005. Upon graduation in 2005, Erik relocated to Los Angeles for a position as a master printer at Gemini G.E.L., a fine art publishing house located in West Hollywood, California. In 2010 Erik relocated to Las Vegas where he maintains his studio practice, installs major works of art into private collections in the Las Vegas area, and maintains a position of Adjunct Instructor for the College of Southern Nevada. In 2013 Erik will return to Chicago to begin pursuit of his Master of Fine Arts Degree (MFA) from the school of the Art Institute of Chicago, where he was accepted through the Print Media department.

The conference, co-directed by Joel Jonientz, Brett Ommen, Kim Fink, and Brian Fricke, benefited from the support of the UND’s department of Art & Design, Communication Program, UND Art Collections, and Department of Music. Additional support came from the UND Office of the Provost, the UND College of Arts and Sciences, the Myers Foundation, and the North Dakota Council on the Arts.

The portfolio was developed and editioned digitally by UND’s Sundog Multiples and Erik Beehn, former Master Printer at Gemini G.E.L print studios in Los Angeles, California. Sundog Multiples, under the direction of Professor Kim Fink, operates in affiliation with the UND’s Department of Art & Design to engage students more meaningfully in printmaking processes, to provide collaborative opportunities for students and artists, and to observe professional artists at work.