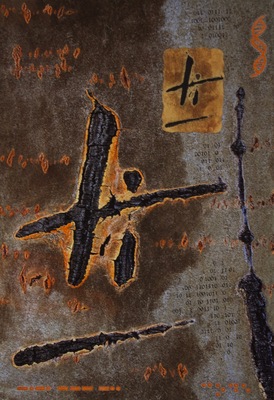 Seemingly disconnected backgrounds formed Linda C. Eversons’ art career. Linda was raised in ND in a woodworking family, instinctively doing artwork as a child. She first experienced art classes at UND where she graduated with a major in Fine Arts. Subsequently, Linda was a graphic designer in the fashion industry in New York, where she gained additional exposure to the fine arts by exploring the contemporary art scene in Soho and the uptown museums. Post-graduate studies were completed at multiple venues, and printmaking (with photographic components) is her primary medium. However, Linda also does some shaped paintings, mixed media work, bookmaking, and paper arts as well. Linda currently lives in Colorado and does fine arts in her home studio.

The confluence of her ND roots, NY experiences, and the Colorado landscape has impacted Linda’s aesthetics. Also. Traveling the US and the world extensively has given her insight into various sights, cultures, artifacts, and architecture which have influenced the textural imagery, symbolism, and jewel-like palette in her artwork.

Linda was involved in several art memberships, including an art co-op. For several years, she was the Co-President and Co-Chair for Exhibitions of the Women’s Caucus for Art/Colorado Chapter. In these capacities, she curated several of the WCA-CO art shows. It was in these venues that she explored other art mediums, concepts, and themes. Her artwork has been shown locally, nationally, and internationally. She has won several art awards, been published, and has done several public art commissions.

The conference, co-directed by Joel Jonientz, Brett Ommen, Kim Fink, and Brian Fricke, benefited from the support of the UND’s department of Art & Design, Communication Program, UND Art Collections, and Department of Music. Additional support came from the UND Office of the Provost, the UND College of Arts and Sciences, the Myers Foundation, and the North Dakota Council on the Arts.

The portfolio was developed and editioned digitally by UND’s Sundog Multiples and Erik Beehn, former Master Printer at Gemini G.E.L print studios in Los Angeles, California. Sundog Multiples, under the direction of Professor Kim Fink, operates in affiliation with the UND’s Department of Art & Design to engage students more meaningfully in printmaking processes, to provide collaborative opportunities for students and artists, and to observe professional artists at work.