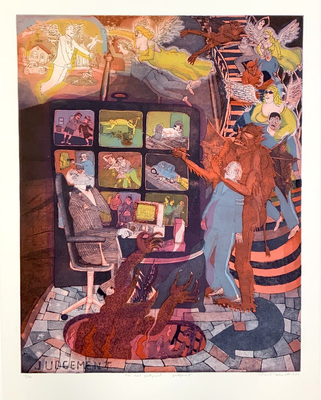 Warrington Colescott was a painter, printmaker, and educator known for his satirical etchings. Colescott received his Bachelors of Arts from University of California Berkley in 1942. He was drafted into the United States Army in WWII and upon his return went on to receive his Masters of Fine Arts in 1947.

Colescott began his career as an instructor at Long Beach City College where he taught for two years before moving to Wisconsin. There, he became a professor at the University of Wisconsin Madison. He studied printmaking in Paris and London where he learned the full spectrum of printmaking processes and shifted his work from serigraphs to intaglio etchings.

Colescott's works can be found in esteemed collections in the United States and Europe including the Victoria and Albert Museum and the Tate Gallery of Modern Art in London, and the Bibliothėque nationale de France, the Metropolitan Museum of, the Museum of Modern Art in New York, the Whitney, and the Smithsonian American Art Museum.

A demon showing people a control room in Hell.