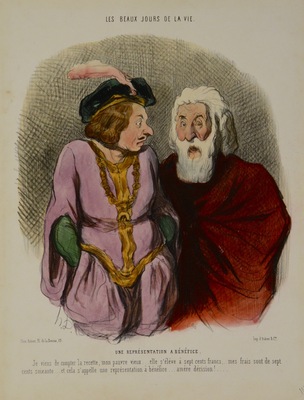 - My old friend, I just calculated the receipts of this performance... they amounted to 700 Francs... my costs amount to 760... and this is called a benefit performance... quite a joke.

The print is about actors who have participated in a benefit performance to raise money for a humanitarian cause, but instead of acting benevolent, they complain about their financial expenses. Daumier often criticized attitudes of the bourgeoisie in regard to the genuineness of their charitable efforts.