Vier Männer in der Kneipe (Four Men in a Pub) 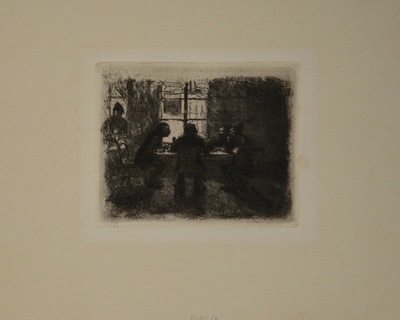 Kaethe Kollwitz was born in Germany in 1867 and died in 1945. She is generally regarded as the foremost woman artist of her time. She studied art in Berlin and Munich and was influenced by the works of Klinger and Hogarth. By 1918, she was so highly regarded in Germany that she became the first woman to be elected to the Academy and was later made director of the department of graphic art. She lost a son in the first world war and much of her work was devoted to anti-war and other social problems. Forced to retire when Hitler came into power, her works were banned by the Nazis from German museums. She died in seclusion just before the second world war ended. Examples of her work are contained in nearly all of the great museum collections of the world.

A powerful advocate for social justice, Kollwitz used her art to call attention to the plight of impoverished laborers. This print is thought to be the basis for a later work of similar composition titled Conspiracy, part of her Weavers’ Revolt series, which told the tragic story of a failed insurrection of northern European workers earlier in the 19th century. Kollwitz’ expressive image conveys a sense of foreboding; in the murky atmosphere of the pub, these men are clearly not just engaged in idle conversation.