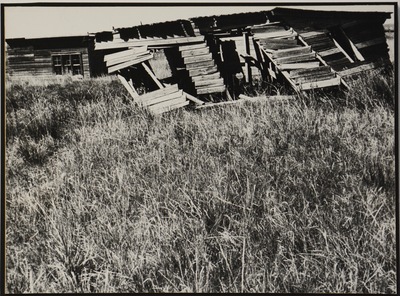 Dennis L. Sorensen grew up in Grenora, North Dakota. He attended the University of North Dakota, receiving a BA in Anthropology and then entering in the graduate program in Visual Arts for one semester sometime during the 1974-1975 academic year. In his early career, Sorensen pursued interests in photography, graphic arts, and publishing.

Sorensen’s photograph, which features a collapsed farm structure, was acquired by the UND in 1975 from a juried student show sponsored by the Art Students Collective, an organization that continues to operate today.

Part of the Farmer's Choice Exhibition 2014