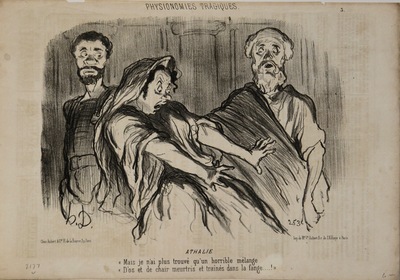 English: ATHALIA "But I only found a horrible mixture "Bruised bones and flesh dragged through the mire ....!"

Daumier’s lithograph shows scene from a performance of Athalie, the final tragedy of seventh-century French writer Jean Racine. What is perhaps most interesting in the print are the high-contrast illumination effects that Daumier reveals that suggest the “modern” use of gas light—rather than oil lamps, which had been utilized previously for theatrical lighting.