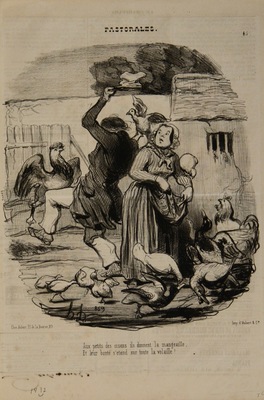 English: Pastoral: To the young of the goslings, they give the manger, And their kindness extends over all the poultry

Lithograph, initialed in the lithographic stone

Often addressing social topics, Honoré Daumier was highly prolific as a satirical cartoonist and printmaker, but less active as a painter and sculptor.

The lithograph on display is plate 45 from Pastorales, a series of 50 prints about the “romance” of country life published in the French illustrated newspaper Le Charivari between1845 and 1846. The French caption below the image can be translated into English as follows: To the small of the goslings they are giving the feed, and their kindness extends all of the poultry.